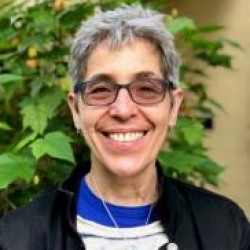 Mon: via Zoom: by appointment only

Wed: via Zoom: by appointment only

Fri: via Zoom: by appointment only

Since receiving her MPH at SF State, Deborah Craig has been a lecturer in the Department for over 10 years. She primarily teaches 210, Personal and Social Determinants of Health, and 400, Community Assessment in Public Health. Her teaching philosophy is: Students First! Deborah is also an award-winning documentary director and producer whose films use compelling personal stories to raise awareness about the challenges and strengths of underrepresented communities. Her short documentary “A Great Ride,” about several lesbians aging with humor and a zest for life, premiered at the Frameline LGBTQ Film Festival in San Francisco in 2018 and has screened at over 50 film festivals around the world. Her new film-in-progress is about SF State’s own Sally Gearhart, a lesbian feminist trailblazer who fought for gay rights side-by-side with Harvey Milk.